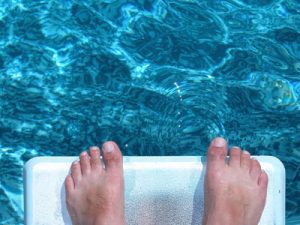 As I was walking down the beach the other day, praying and listening to God, I heard this phrase: “Get off the edge.” Since that day, I’ve been pondering what is the meaning and purpose of this phrase. I’ve come to a few conclusions and I believe they are not just for me, so I’d like to share them with you to consider also.

I was at the Poles (a surf spot) looking at the waves thinking how they’re just too big for me to go out in. It was also really cold so the process of putting on a wetsuit made it easier to negate the idea. Then an older bald fellow carrying his longboard breezes past me, smiles real big and says, “Just do it. C’mon, do it.” and continued walking down the beach and into the water.

Usually if we’re on the edge about something, there’s a reason. We’re not sure, we’re nervous, we’re afraid, etc. We don’t want to get off the edge. That was me that day at the Poles. I was scared. Even after the encouragement from the elder surfer, I went backhome.

Failure is the Fear

I think the fear of failure is what causes all this “edginess.” We’re anxious. What if we fail? Then we’ve learned something. What if we get hurt? Then we’ll need time to heal. What will people think? What if I look silly? Then we may need to swallow our pride and be humbled.

If we were to launch a new business, commit to a relationship, go back to school, adopt a child, start a new exercise or weight-loss regiment — what would happen if we were to fail at these things? This is typically what goes through our heads before we start. Most of us are like standing on the edge of a high-dive looking down at the water afraid of the negative “What ifs?” But what about the positive “What ifs?”

What if we finally have met the guy we want to spend the rest of our lives with? What if we actually tried to write that book we’ve had in the back of our minds for 20 years? What if we started taking dance/piano/swimming lessons? What if we switched jobs, even moved to another country? Imagine the fun/adventure we could experience!

Think about Abraham going into a land he’s never seen before. Think about the spies checking out the land of milk and honey. Think about the Israeli moms packing up their babies after Passover night and leaving in the morning. Think about John the Baptist eating locusts and honey in the wilderness. Think about Peter stepping out of the boat during a storm.

Did God promise that I would never fail? No. Never go through a hard time? No. Never get hurt emotionally, physically, or financially? No. In fact, He said there would be trials and tribulations we’d go through. (The word tribulation sounds so much worse than the word trial does.) But He did promise that He will be with us in the midst of all these things — good and bad.

So the point (that I’m telling myself) is that the answer is not necessarily “Just do it.” But at least get off the edge — decide to surf or not surf — then be at peace with the decision. Be settled. Do it or don’t. Follow His lead then trust Him.

My father used to say, “Don’t tell me can’t, tell me you’ll try.” May you and I prayerfully consider those things we are on the edge about this year.