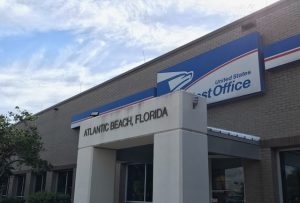 The other day I was in line at the post office to mail a package. There were 5 people in front of me, not including the two people at the counter, and a lady behind me. As we were all waiting our turn, an elderly gentleman walked in using a cane while carrying a heavy package. He set the box down on the divider and nicely mentioned to the lady behind me that he was in line but because the package weighed so much, he was going to stand by it just a few feet away from her.

Observing the load the man had, as well as his age and disability, the second person in line nicely asked him to go before her, giving up her place. However, when the woman who was first in line was called to the counter, she insisted he go ahead instead. Slightly embarrassed, the elderly man glanced at all of us whom he would be cutting in front of. But with big smiles and head nods in agreement, all of us urged him to jump ahead and go straight to the counter. Humbly and gratefully he hobbled forward with his cane to the postal worker.

At that moment I was overwhelmed by the kindness of strangers. Looking into the faces of each person this elderly man was allowed to “cut” in front of, I saw graciousness and tolerance. When daily I watch the news and hear about so much negativity in the world, I was encouraged by the courtesy and generosity of these regular people. It just so happened that within this line there were different races, different ages, and different genders. And who knows how many other things we were all different in, yet, decency and love of fellow man reigned.

Then after leaving the post office I felt the Lord tug on my heart. He said, “Now that was a positive point, wasn’t it? You should look for those moments more often.”

It was a moment — a positive point. A point where a situation typically perceived as negative (like standing in line), changes to where something positive comes out of it.

Yes, this did seem like a rare occurrence, however, I believe these things do happen daily — most of which we never identify or even notice, much less celebrate. There really are some kind and thoughtful people still out there in this world. Maybe they’re Christians, maybe not. But those of us who are, what a great way to express Father’s love to strangers.

So now I’m on a mission: to find positive points throughout my day. I know they’re there, I just have to be diligent to look for them. To not get so caught up in the negatives of my day and try to see the positives that are there. Will you join me in the search during your day?

I’d love to know what positive points you find. It’d be great if you could share them in the comments of this blog post so we all can see and celebrate. Thanks dear readers.